If you went back in time and told someone that one day people would be making electricity from the light of the sun, they might have taken you to the local witch-doctor to cast out whatever spirit was possessing you. Go back far enough, and people would have locked you up in an asylum and thrown away the key for merely trying to explain what electricity is! With the progress of technology, the line between magic and science has become more and more blurry, if you think of it in those terms. Just look around yourself right now, and count out a few things that a caveman would have sworn, on the bones of his ancestors, were magic. I’m guessing there are too many to count. From your computer screen, to your car, from your air conditioner or fan, fridge, or microwave to your Roomba, everything would appear to be magical to a caveman or cavewoman. So, what separates science from magic? For instance, I could shout “Abracadabra!” every time I turn on my light, but other than annoy my cat, that wouldn’t change the fact that the light would still turn on after I flip the switch. Is magic just unexplained science? Or maybe a better way to look at it is that science is explained magic. Either way, we’ve found the difference between science and magic. Science can be explained, quantified and repeated. Magic, not necessarily so. The point of taking you down this trip to looney town is to hopefully coax you into reading on and understanding how solar energy works. Afterall, if we can’t explain our science better than that witch-doctor could explain his (or her) concoctions, we might as well all start making “confused unga bunga noises” every time we switch on a light. Another, more grounded reason is that if you’re planning to spend upwards of $4000 on a system, you might want to know how it works. This way not only can you equip yourself with the knowledge to make the most financially sound decisions, but you also develop acumen that can guard you against some shady characters who would gladly take your money and do a mediocre job. So, buckle up, and join us on this journey to understand how solar power works!

The sun is our planet’s single largest source of energy. One hour of sunlight alone is enough to provide the entire world with enough energy for a year. Trying to harness this unlimited, for all intents and purposes, power is only a logical step in the evolution of our energy industry. Since Edison invented the first lightbulb (no offense to the Tesla fan club, please put down those coils!) and since Michael Faraday discovered electromagnetic induction, human beings have always been seeking out newer and more potent ways to exploit the world’s resources and use them to power bigger cities and larger factories. So much so, that we’ve pushed our planet almost to the point of no return, for us anyway. Make no mistake that if humanity collectively drowns in a climatic disaster of our own making, the earth, and life on it, will go on like it has for eons. But who wants that, right? So, the onus is on us to now find cleaner and more environmentally sustainable ways to coexist with the planet and its wonderful biodiversity, and in doing so, secure a better and brighter future for our children and their children.

Enter Solar Energy. Solar energy is the brave new frontier in our quest for energy sustainability. Not only is it 100% clean and renewable, it is practically free (unless the government decides to tax sunlight!). Solar energy is seeing global adoption. The world’ largest economies like China, the United States, Japa, Germany, India, the United Kingdom and Australia are among the top adopters of solar energy. Advancements in solar energy systems has made this possible, as solar power is now cheaper and more efficient than ever. In this series of articles, we’re going to go through the basics of solar radiation, photovoltaic and concentrating solar-thermal power technologies, electric grid systems integration and the costs of solar energy. Finally, we’ll also look at what’s new in the solar world and how research and development in China and the U.S is driving innovation in the aforementioned areas. For the remainder of this article, we’re going to look at how solar energy systems convert sunlight to electricity, in the simplest manner possible.

What Exactly is Solar Power?

Simply explained, solar power is the process of converting the sun’s light into useful forms of energy. The sun’s light is called solar radiation or electromagnetic radiation. Every part of the earth’s surface receives at least some solar radiation over the course of a solar year. The amount varies from place to place and from time to time. Not all places receive the same amount of solar radiation. What solar technologies do, is that they capture this radiation and convert it into electricity.

How Do Solar Energy Systems Work?

Solar panels are made up of smaller cells, which are made of silicon, a metal frame and a glass casing all encapsulated in a special film. Then of course, there is the wiring, which connects the panel(s) to the rest of the house. The cells in a solar panel are made up of silicon because silicon (the second most common material on the earth’s surface) has a symmetrical crystal lattice that makes converting light into electricity much easier than any other material. Silicon made solar cells provide the most efficient, cheapest and longest lasting cells in the world. These cells absorb sunlight during daylight hours. You will normally see solar panels grouped together in arrays, or ordered numbers to maximise the surface area exposed to the sun, and they will often be placed on roofs or another outdoor area. Solar cells are often referred to as Photovoltaic Cells.

Solar cells have two layers of silicon that act as a semiconductor within them. This is often referred to as the wafer. The top layer has a positive charge and the lower one has a negative charge. This creates an electric charge in the solar cells. When light strikes the surface of the cell, it energises the crystal lattice and allows photons (the energy particles that make up solar radiation or light) to knock electrons free from atoms and generate a flow of electricity within the wafer. This creates an electrical current within the solar cell.

In the previous step, we saw how solar energy is converted into electrical energy within the solar panel. Through wires, this energy can be transmitted to a socket. However, the electrical current generated in this manner is called direct current (DC). In direct current, electrons flow in one direction. This is dangerous, as victims who get shocked with DC are unable to pull their hands back, as the electrons all flow continuously, without break and in one direction. AC, or alternating current, allows electrons to periodically change their flow. Every so often, the electrons will reverse direction. AC is much safer to use (RIP Topsy the Elephant!) because it allows people to pull away from the source of the current when electrons change direction. That’s what a solar inverter is for. They convert DC to AC.

The newly converted AC now reaches all the panels in your house through wires and is ready to be used by any appliances plugged in. It works exactly the same way as grid power, but the source of the power is the sun, harnessed through solar panels installed on your roof. Houses can remain connected to their local power companies and draw electricity from both their solar panels as well as the national grid to supplement shortages in solar power.

When you’re not at home, your solar energy system is still collecting energy (unless you stay home during the day and are out at night). This excess energy is supplied to the grid and your local energy provider will provide credits for the amount of energy you send back to the grid. This is called a feed-in tariff. The net meter monitors the amount of incoming and outgoing energy from your solar power systems. 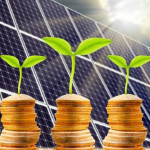 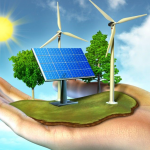 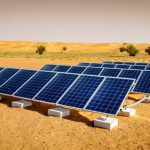 Against the Tide: How Solar Power Can Lead Pakistan’s Uphill Battle Against Climate Change

Things You Need to Know Before Installing Solar Panels in Pakistan 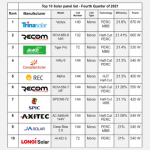